Save -Infinity
Sold Out

This antique lapis carving is, in one word, STUNNING… exquisitely carved, predominantly rich solid blue (varies to a slightly lesser degree on one side), and somewhat uncommon symbolism. Measuring approximately 2 x 1/1/4 x 1/3 inches, the top is drilled to accommodate a pendant.

There are total of three pumpkins, a six-petal flower and complexly twisting vines. 33.8 grams. Pumpkins speak of prosperity, abundance and luck. More specifically to the point, pumpkin seeds symbolize multiple children – male children – which continues to be highly desired in past and present China. The tendril foliage undulate around the pumpkins is all the more auspicious because the meaning is now enhanced by the formulary expression of many male offspring.

The name “lapis lazuli” comes from the Persian “lazhward”, and literally means “blue stone”. Throughout the Latin speaking Roman World, however, the word “sapphirus” was used (with the same meaning), and has led to speculation that in certain historical sources, “sapphires” of antiquity were really lapis.. The Egyptians long valued this stone, not only as a source of carving and inlay material, but also in ground form as a cosmetic. IF YOU’VE EVER WONDERED WHO TO BLAME FOR BRIGHT BLUE EYESHADOW… Painters from pre –Renaissance times until the Modern Era used ground lapis as their pigment “ultramarine”, and that old formula is still used today by museum conservators as well as forgers! The colors of lapis range from a medium greyish blue, to intense royal blue, to deep indigo, with varying amounts of white and brassy gold from calcite and pyrite, respectively. Some purists desire a gem that is almost entirely lazurite, in a deep uniform blue, but most seek a piece with a moderate to generous sprinkling of golden pyrite. Pliny the Elder in his noteworthy ancient treatise on all things Natural, called Lapis ‘a fragment of the starry firmament” in admiration of the deep blue with twinkling bits of gold. 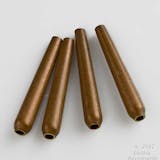 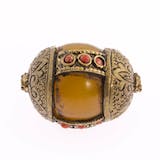